Making a hood (sometimes called a cap, I'm including both in the hope that people will find this post searching for either) has long been a a desire of mine. I have very long hair which refuses to be contained by strips of tablet weaving or wrapping a cloth around it in almost any fashion. I was hoping that with this I would be able to keep my hair out of my face at events and maybe keep my ears cosy too.

I was lucky enough to have a piece of cloth woven for me to make this. There is a separate blog post here about the fabric if you want to get in depth about it.

References and construction: There have not been an enormous amount of finds of headwear from the era I'm most interested in (late 9th century). Of the cap sort such as this, there are two main types usually referred to as Dublin and Jorvik respectively. Although constructed similarly, there are some key differences. In Dublin the caps were made of wool and in Jorvik they were made of silk. Jorvik is geographically closer to my 9th century home so I made the decision to go for a Jorvik style cap.

Let it be noted that I used woollen fabric because Toby hasn't had a crack at weaving silk yet. I was getting a beautiful, small piece of close woven to a period design and wanted to use it in a project that would show it off. Where better place than on my head? So I confess that I could have upped the authenticity of this project hugely by changing the fabric but beyond that I have done my best to use the archaeological evidence as my guide. I also couldn't find much information about colour in these silk caps so chose a colour which was definitely available from a widely used dye stuff (woad).

All of the information I have since gleaned about the caps has been from another York Archaeological Trust publication, Textiles, Cordage and Raw Fibre from 16-22 Coppergate by Penelope Walton. I really can't recommend their publications enough.

This document has a diagram of an almost complete silk hood which I'm going to reproduce here because it is so incredibly awesome. Enormous thanks to YAT for making these incredible resources available to us. 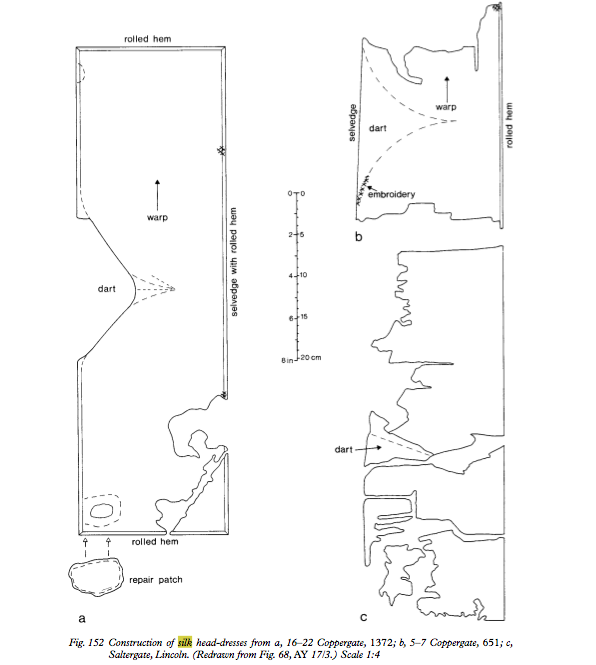 It's essentially a pattern for making the thing and most importantly it shows you that nearly all of the modern Jorvik hoods that you see pictures of online are wrong in one important way - they are too big. This cap was narrow and short. Having followed these dimensions as closely as I could (except in the tie placement, more on that in a moment) the style of cap is quite different from the more hood-like ones you see a lot online. For a good visual guide to the sizes of caps which have been found there is an interesting diagram here.

Now that I've made one I can also fully appreciate the techniques used to construct it. If I had been using silk I would have wanted all the raw edges dealt with first too, so rolling each edge of the rectangle you start with and stitching it down takes care of that. Then fold it in half and add a back seam and dart, but don't cut off the excess fabric in the dart. In something fine like silk this would fold neatly to the side and not get in your way, and it saves you risking sewing a fiddly curved seam in silk and then having the raw edges to deal with.

The only real difference in construction between this and a Dublin cap is that on those the dart flap is on the outside and not the inside. In the example from York above the dart fabric has later been cut off to repair a hole in the cap. Human touches like this are one of the things I love most about re-enacting.

Once the hood is constructed it's time to add the ties. Although none survives we can surmise that there were ties  through the presence of stitching half way down the front edges of the cap. The stitches on the Jorvik find above were silk and look from the diagram like cross stitches. Underneath there are a few trapped vegetable fibres believed to be linen. I constructed linen ties out of some unbleached linen I have used in my kit elsewhere but decided to add a bit of detail with a contrasting herringbone stitch along the tie. There's no evidence for this anywhere (although it is an authentic seam treatment), I just fancied it.


I tried the ties in the same place as the stitch holes on the cap find but they didn't sit right with my ears when I tried to tie them back. By moving them an inch downwards they fitted my face much better. This is one of those moments as a re-enactor where you have to make a judgement call.  A lot of caps I've seen online have the ties even lower than this, or even on the bottom corner. By lowering them slightly I felt like I had personalised the cap to me without going to far from the evidence. Without a greater sample of caps to look at we have no idea whether the ties were always in the same place or not.


Queries: How was it worn? No one knows, but the reference to the creases leading to the ties gives some clue. I have tried tying it in about 6 different ways so far and I cannot get the fabric to crease in the way that the original was.
Summary: Having reconciled myself with using a fabric made of the wrong fibre, I think that the rest of this cap is one of my well-researched bits of kit yet. It helps that a near complete one was found and I got my hands on a brilliant diagram of it. If only there were more complete textile finds like this!

The loveliest thing about this project has been the growing understanding of why they were constructed as they were. A good sense of reconnection with our ancestors is something I think that all re-enactors are looking for and making the same object with a very precious (to me) fabric gave me great respect for the techniques of the seamstress who made the cap found in York.

I'm looking forward to making another of these in silk one day (if I can get some woven for me!).
Posted by Unknown at 12:36